Rachel and I created these chants by singing while playing our shruti boxes. A shruti box is a small wooden instrument from India that works on a system of bellows. It is similar to a harmonium (but without the keyboard) and provides a droning sound that is extremely conducive to meditation and chanting. “Shruti” is a Sanskrit word that means “hearing” and, also, “revelation.” Hence the name, “Voices of Revelation.” I offer these songs to you with love. I offer these songs to all who wish to hear Spirit’s message of infinite love, healing, and hope for all of creation. – Jere Friedman

It has been a Divine pleasure to collaborate and co-create these sounds with Jere. My intention is that all those who listen be filled with the vibrations of Eternal Love that are present within us all and that I so deeply experienced during the recording process. May all who listen be lifted to experience the Love that we all are! Enjoy! – Rachel Alter

Om Mani Padme Hung – There are many interpretations for these Sanskrit words, with one of the most common being “Behold! The Jewel in the Lotus!” Om mani padme hum(ng) is an important mantra in Buddhism. It is the six syllable mantra of the Bodhisattva of compassion, Avalokiteshvara. The Dalai Lama is said to be an incarnation of Avalokiteshvara, so the mantra is especially revered by his devotees. The Dalai Lama had this to say about this mantra: “It is very good to recite the mantra Om Mani Padme Hum . . . [T]he six syllables . . . mean that in dependence on the practice of a path . . ., you can transform your impure body, speech and mind into the pure body, speech, and mind of a Buddha. . .”

Peace, Be Still – Jere based this chant on the following quote by John-Roger, D.S.S. “Practice using what I call the nine magic words. The first three are, ‘I love you.’ The second three are, ‘God bless you.’ And the third three are, ‘Peace, be still.’ Say them silently when you are in situations of conflict or upset. These words are powerful.” Jere took John-Roger’s nine magic words and added two variations. First, “I love me, God bless me . . .” The intention with this variation is to reinforce the importance of self-love, because how can one love another without first loving oneself? Second, “We love us, God bless us . . .” The intention with this variation is to acknowledge the reality that we are all one, and we are all in this together.

Chant Without Words - Gongmaster Don Conreaux introduced Jere to chanting and overtoning with the shruti box in 2009. Thanks Don!

Sa Ta Na Ma Ra Ma Da Sa Sa Say So Hung – This chant consists of two mantras. The first mantra, “Sa Ta Na Ma,” consists of the Sanskrit sounds Sa, Ta, Na, and Ma. These sounds are translated, respectively, as (1) Infinity, representing the totality of the Cosmos, (2) Life (birth of form from the Infinite, (3) death or transformation, and (4) rebirth. The second mantra, “Ra Ma Da Sa Sa Say So Hum(ng)” is a powerful mantra that is chanted for healing. “Ra” is the sun, “Ma” is the moon, “Da” is the earth, and “Sa” is air or the impersonal infinity. "Say" is the totality of experience, “So” is the personal sense of identity, and “Hum(ng)” is the infinte. The first part of the mantra (“Ra Ma Da Sa”) expands toward heaven. Then, by repeating the sound “Sa” as a turning point, the second part (“Sa Say So Hum(ng)”) causes the spirit to descend from above into matter in order to animate and vitalize it with life and healing. In other words, the second part of the mantra brings the healing qualities of the world back down to Earth. Chanting or listening to this mantra can be quite uplifting – it is timeless and can re-energize your life.

Floating Clouds – Jere loves watching the clouds in the sky. A few days before recording these chants, he was enjoying watching some especially wispy clouds in the Arizona sky. Jere thought, “Wouldn’t it be nice to create something that sounds like clouds floating in the sky?” So here you go – what shapes do you see up there?

Om Namah Shivaya – Om Namah Shivaya is known as the great redeeming mantra. It means “I bow to Shiva.” Shiva represents the supreme reality, the inner Self, your true identity. It is the name given to the consciousness that dwells in all. Om Namah Shivaya is a very powerful mantra. This mantra is free of all restrictions. It can be repeated by anyone, young or old, rich or poor and, no matter what state a person is in, it will purify him or her.

I Shall Go – Rachel took the words for this chant from a song by Matisyahu. We see this chant as a meditation on Surrender. It speaks to the beauty that is present when the power of Spirit meets our willingness to step forward on our path towards loving service.

This Soul is Pure – This chant is based on a line from the morning prayers in the Jewish tradition, “My God, the soul You have given me is a pure one!” The transliteration of the Hebrew is: Elo-hai n’sha-ma she-na-ta’ta bi t’ho-ra hi.”

Oseh Shalom – This is a blessing of peace, from the traditional Hebrew words meaning “May the One who makes peace in the high heavens make peace for us, for all Israel and all who inhabit the earth. And say amen.” The transliteration of the Hebrew is: “O-seh sha-lom bim-ro-mav, hu ya’a-seh sha-lom a-ley-nu v’al kol yis-ra-el, vim-ru a-men.”

Peace Unto You / Om Shanti Om – The first part of this chant was inspired by the line from Psalm 122, “Pray for the peace of Jerusalem.” Jere quotes several lines from Psalm 122 as the invocation for this chant. The second part of the chant consists of the traditional Sanskrit words “Om Shanti Om.” “Om” is considered to be the primeval sound, the sound of the universe, the sound of creation from which all other sounds and shapes are formed. The gongs, which are played during this chant, bring forth the sound of “Om.” “Shanti” means peace. With this and our other chants, we wish you eternal blessings of peace!

Rachel Alter acknowledges and appreciates: My gratitude goes to Jere, who invited me to join him in this co-creative process and in doing so gave me the opportunity to further explore my own voice. I am also grateful to my brother Ben, who brought me the most beautiful shruti box from his adventures in India. I am grateful to my mom, Ellen, who has always supported me and encouraged me to sing out. And, of course, gratitude to Spirit, whose Presence was palpable in this process. I am so grateful to have the awareness of the Presence of Spirit throughout my life! 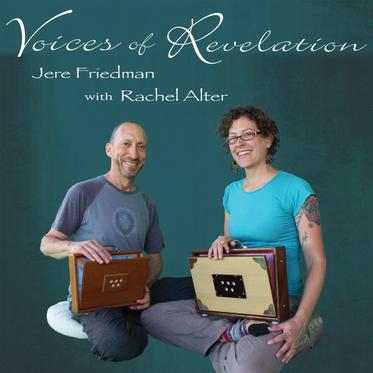 “Voices of Revelation” is a collection of chants that we hope will lift the listener with sounds of joy, love, and praise for the Infinite Creator of this universe. You may enjoy listening to these chants during meditation or yoga, for relaxation, or at other times. We also encourage you to sing along with these chants – singing activates the breath, which is the life force that sustains us all. Singing out loud can leave you feeling refreshed and energized. It doesn’t matter whether or not you “think” you can sing – your voice is BEAUTIFUL to the ears of the Divine.

LISTEN to samples from Shelter of Peace